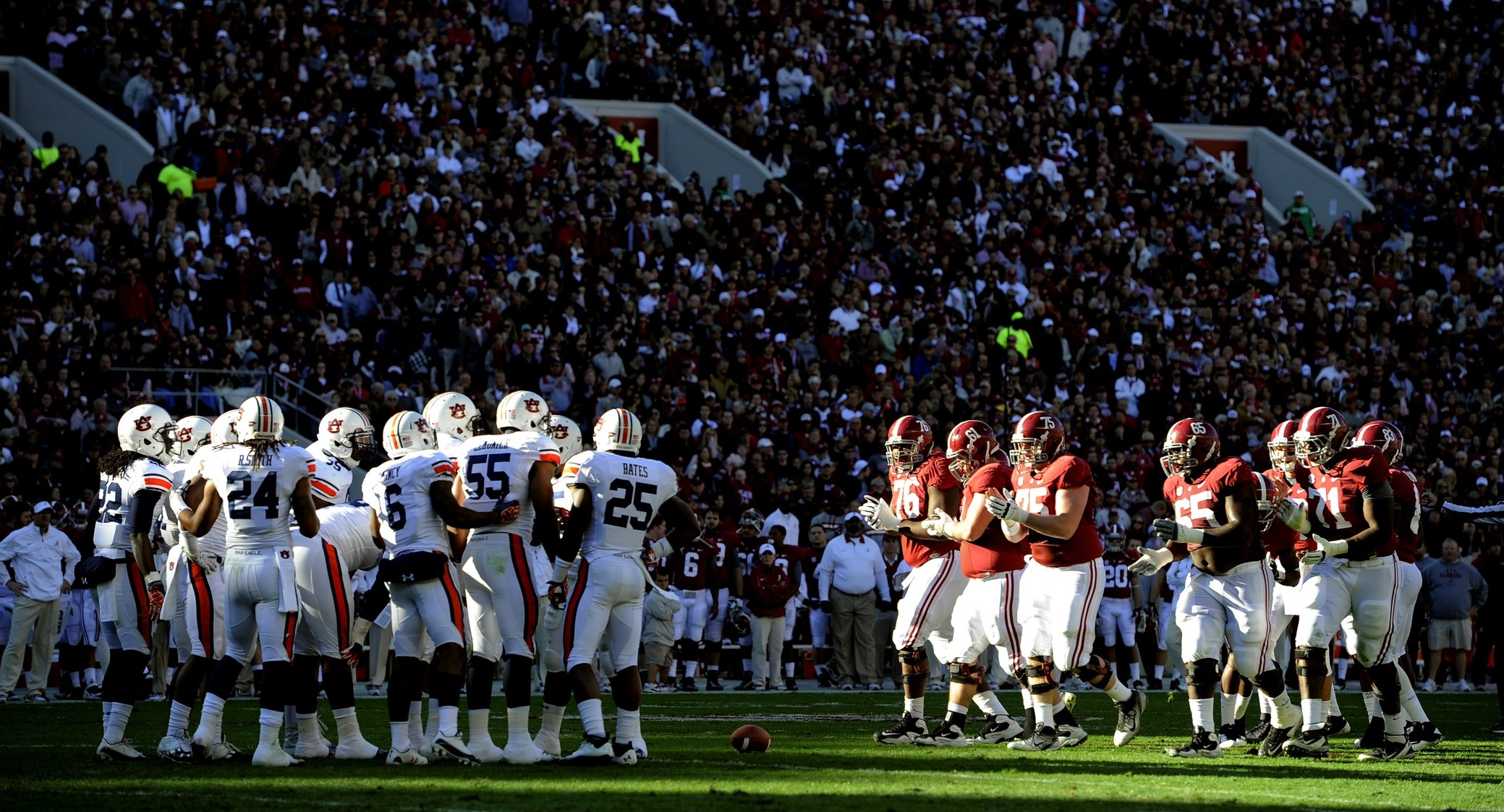 Is the SEC cheating its television partners in Week 12?

Multiple media members have posited the idea that the SEC should join other “Power 5” conferences (BigXII & Pac12) in playing a 9-game conference schedule in the regular season. Tim Brando of Fox Sports (among others) have taken to Twitter and other outlets to decry the week 12 schedule as abysmal and they complain that it is akin to the SEC stealing money from their television partners.

Frankly, the SEC’s slate of games in Week 12 is not good (six games against *ahem* less than stellar competition), but I would argue the SEC’s schedule is more balanced from Week 1 to Week 13 than any other conference.  To this end, let us look at data to see where SEC scheduling compares with other conferences.

From the outset we will determine whether a school is attempting to schedule strongly by looking at two factors: how many teams are on the schedule from the other “Power 5” conferences (ACC, B1G, BigXII, Pac12 & SEC), and secondly where do the conference games fall on those schedules.  Additionally, we will count both Notre Dame and Brigham Young Universities as “Power 5” schools even though they are independents, given their relative history as football programs.

Lastly, all scheduling of teams from outside of the “Power 5” conferences will be treated equally without regard to their current standing in the polls or rankings.  This is done for the simple reason that schedules are made up at a minimum of 3-5 years in advance.  Attempting to schedule “Power 5” teams is an attempt to schedule an opponent of equal size and strength (relatively).  The Non-Power 5 schools fluctuate wildly in their relative strength.

The College Football regular season takes place in thirds and for most conferences, the league schedules begin in earnest the 4th week of the season.  This is particularly the case with the ACC, the BigXII and the B1G Conference.  The Pac12 and the SEC start their conference seasons earlier in September.  The schools of the SEC played 12 conference games in the month of September, by far the highest of all conferences.  The BigXII and B1G by comparison played two, and one in September (respectively).  The SEC filled 46% of its available game slots with conference games.  Among them, Florida vs. Tennessee, LSU vs. Auburn, Mississippi vs. Alabama and Arkansas vs. Texas A&M.  All of which are intra-conference rivalry games.  The Pac12 gave their television partners six conference games in September; among them, Stanford vs. USC and Arizona State vs. USC.  The biggest conference game the ACC provided television partners was Clemson vs. Louisville, the B1G had one conference game; Rutgers and Penn State.

A measure of a school’s willingness to challenge its self is to gauge its schedule of teams from other “Power 5” conferences.  Sometimes this is the case of an in-state rivalry, sometimes it is a game of national importance.  Either way, the scheduling of non-conference “Power 5” teams shows the school (and by extension, the conference) is at least willing to try to create a good schedule.

The leader in this category is the ACC.  The schools of the ACC will play a total of 22 games outside of their conference against “Power 5” schools.  This is, by far, the most…but with one caveat:  six of those 22 games come against Notre Dame, who joined the ACC as a partial member.  While these are technically non-conference games, they are part of a contract between the ACC and Notre Dame.  Taken away, the ACC has 16 Power-5 Non-conference games.  Other conferences scheduled as follows:

While the SEC will schedule six teams in Week 12 who are not “Power 5” teams (14% of the schedule), the September schedule is 13 percentage points lower than the national average in this category and 19 points lower than the BigXII.  Take away the SEC’s 41% and the national average of game slots filled by teams not from “Power 5” conferences swells up to 58%.  On balance, the SEC evenly distributes what many pundits would call “bad games” against inferior competition.

Some conferences space these off weeks out and others would rather have those off-weeks come in the middle of the grueling season.  The chart below shows the distribution (by percentage) of off weeks throughout the season.

The Pac12, SEC and B1G schedule almost all of their off weeks in October, whereas the ACC and BigXII evenly distribute.  The SEC has a total of one off-week in the months of September and November combined.  The confernce scehdules the 13 other off weeks in October during the height of the confernece schedule.

* Note: the BigXII concludes its regular season on December 5th, 6 off weeks are calculated into this percentage.

If anything, the SEC does a much better job of catering to television partners than any other conference because it evenly distributes both its conference and non-conference games through all three months of the schedule.

Does the SEC need to add a 9th game to their conference schedule?  The question begs another question:  Would adding a 9th game to the conference slate change the scheduling of Week 12?  Probably not.  The SEC has shown that it will front-load the schedule willingly to play bigger conference games earlier and take their bye-weeks in October…which would leave the other games (non Power 5) for the later weeks.